“Greig is truly one brave man, and is determined to shine a light and help and inspire those who have faced real battles - I admire his courage and resolve so much. No wonder he is a Scout!” 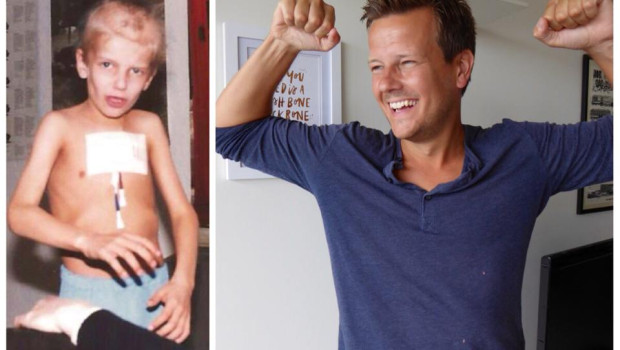 It seems cancer and I go back a long way to the point now that even just hearing the word freaks me out.

You’re probably wondering why I have had cancer twice in my life. I was 7 when I was diagnosed with a Wilms’ tumour which is cancer of the kidney. I had experienced pains in my side for quite a few months but never really told anyone about it and then one night I went for a wee and blood came out instead. This totally freaked me out as I didn’t recall eating any beetroots or drinking any Ribena that night.

I was stage four when the the docs found it so it had spread and I had to have some pretty nasty chemo and radiotherapy before and after they removed my right kidney.

Why did I get cancer as a 7 year old? I think I was just unlucky. A little cell in my body went bad and decided to turn a few others bad too. Kidney removed and treatment done, the Trout lived to see another 23 years! My doctor at the time and the person who helped save my life was a guy called Dr Alan Craft. He is now Professor Sir Alan Craft and is also the chairman of the Scouts. When I told Alan what I was doing he absolutely loved it and has worked closely with me on my trip which is absolutely amazing!

Me (I’m the one with the hat!) with Dr Alan Craft and Olympic legend Edwin Moses

Bowel cancer as a 30 year old was a completely different story. For about a year I felt more and more tired. I seemed to get knackered just walking up the stairs to work which was only one floor!

Something clearly wasn’t right and being the hypochondriac that I am I pestered the doctors to find out why I was feeling like this. After some blood tests the docs found out I had an iron deficiency and when Iron tablets didn’t seem to work. The wonderful Dr Hannah Cohen at UCLH organised every single test going and after a very unpleasant Colonoscopy the docs found out why my iron was so low. They found a 10cm long tumour in my large bowel which had been bleeding for a long time causing my iron levels to drop through blood loss. A week before the procedure I had only my third symptom which was blood in my stool or as I like to call it poo. I was diagnosed with Dukes B bowel cancer which meant the tumour hadn’t penetrated the bowel wall yet.

Transverse Colon removed and a few rounds of chemotherapy later and once again the Trout lived on.

Afterwards though, I suffered with Post Traumatic Stress disorder which I knew nothing about. Some just said I was depressed but I really wasn’t. I was so grateful to be well again but I just couldn’t stop thinking about cancer. I stressed so much I developed eczema on my face and body and suffered from insomnia. I tried lots of therapy which did help to a certain extent but I still struggled. It wasn’t until I decided that I would go travelling and see the world that I began to feel better. Since planning this trip and working on my website, my life has completely transformed. I sleep well now, my eczema has cleared up and I’m now excited and not scared about the future. Having something to look forward to was my way of coming through the dark times.

So back to that question about why I’ve had cancer twice. The docs reckon that perhaps my bowel was caught in the radiation field when I had my radiotherapy as a 7 year old.  Back in 1987 radiotherapy wasn’t as accurate as it is today so a larger area ended up getting zapped. My bowel as a result may have received a higher dose than it really needed and as a result a cell or two may have become damaged and turned into a tumour.

When I was 21 I got Deep Vein Thrombosis, again believed to have been caused by the radiotherapy messing up my veins in my abdomen.

Just so you know this doesn’t mean this will happen to you if you had treatment back then. When I was in hospital this time round I was Mr Case Study for the doctors so clearly I was not something they saw everyday.

My aim now is to try and make my body a cancer hating machine by eating and living well.  Trying to avoid stress if I can which is a nightmare when you think as much as I do and trying to enjoy everyday. Will it come back…who knows but if it does I’m going to kick its ass again!

My Top Tips for cancer survival

When I was ill this time round I asked a ridiculous amount of questions. Hopefully these answers might help you if you are currently kicking cancers butt.

How do you cope with the effect of treatment?

When I was having chemo I did three things to help alleviate the symptoms which included sore hands and feet, mouth ulcers, nausea and fatigue.

How long do you feel rubbish for after chemo or an operation?

This is a tough one because I suffered with Post Traumatic Stress disorder and wasn’t sleeping so I always felt rubbish.  The experts say it can last up to a year until the toxins (chemo) are out of your body but it depends really. If you eat well, exercise and flush these toxins out then you could be laughing after about 6 months.

After an operation your body is still saying ‘what the hell was that?’ It’s a massive shock for the body to have something removed so it will take a while to get over that. I would give it a year before you start to feel like a piece of iron again (said in a Dolph Lundgren voice)

However you feel though make sure you rest and don’t worry like I did. Worry is no use or benefit to anyone….says he!:) Everyone’s body is different so it may take more time or less time to get back to normal.

What are the long-term effects of chemo?

Most people are aware that chemo can affect fertility and there are numerous other side effects like lung function and heart issues. My honest advice to you is not worry about it. If you experience any issues in the future then see the doctor but if you’re anything like me…. if you know about the problem then you think you’ve got the problem! Not good!

What should I eat?

Is there any support I can get?

You are not alone – There are lots of organisations and most things are free: –

There is loads of help out there and once this thing gets up and running I’ll be dedicating a page to support websites, charities and forums. Please drop me Tweet with other organisations that have helped you and I’ll add them to the list.

My family and friends don’t know what to say to me? Is there any info for my family/friends?

When I look back at pictures of me as a child in hospital I no longer see myself in the pictures. Instead I’m drawn to pictures of my parents and brother. It must have been as traumatic for them as it was for me to see me like that. My poor brother who was only 13 and had to spend Christmas at the hospital and come see me all there all the time. I looked so ill and I apparently never spoke. Friends and family often need as much support as the person who is ill so make sure they have access to it.  Macmillan again have great support booklets and advice for friends and family. Counseling is also available.

I am bored, I am too ill to do much and all I can think about is cancer, what do you recommend?